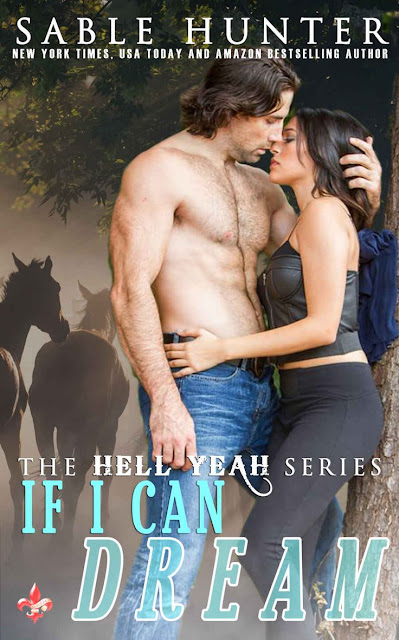 If I Can Dream
(Hell Yeah! Series)
by Sable Hunter
Available on Amazon

The moment Tennessee McCoy lays eyes on Molly Reyes sitting astride a horse in the desert sun, love hits him like a bolt of lightning from out of the blue. She is his soulmate, his other half. They speak the same language, they want the same things. Their attraction is complete, the passion they share nearly consumes them. Knowing she is meant to be his, Ten can’t wait to make her his bride. The future seems bright until happiness slips through their fingers like grains of sand.

When all seems hopeless, sometimes all we have left is our dreams. Ten can only believe what his eyes can see, what his ears can hear. Molly can’t seem to find the words to make him understand that she would rather lose her soul than betray him. Now both Tennessee and Molly must learn to place their faith in one another, to hold fast to love and trust their hearts.

Their journey back to love will be one you’ll never forget.

**Due to mature content, this book is recommended for readers 18 and older.**

“Good. Are you hungry?” he asked as he made a U-turn to head back to the hotel.

Sable Hunter is a New York Times, USA Today bestselling author of nearly 50 books in 7 series. She writes sexy contemporary stories full of emotion and suspense. Her focus is mainly cowboy and novels set in Louisiana with a hint of the supernatural. Sable writes what she likes to read and enjoys putting her fantasies on paper. Her books are emotional tales where the heroine is faced with challenges. Her aim is to write a story that will make you laugh, cry and swoon. If she can wring those emotions from a reader, she has done her job.

Sable resides in Austin, Texas with her two dogs. Passionate about all animals, she has been known to charm creatures from a one ton bull to a family of raccoons. For fun, Sable haunts cemeteries and battlefields armed with night-vision cameras and digital recorders hunting proof that love survives beyond the grave. Welcome to her world of magic, alpha heroes, sexy cowboys and hot, steamy to-die-for sex. Step into the shoes of her heroines and escape to places where right prevails, love conquers all and holding out for a hero is not an impossible dream.

SABLE’S BOOKS
Get hot and bothered!!!

I'll See You In My Dreams
(Hell Yeah! Book 8)
myBook.to/IllSeeYouInMyDreamsHellYeah

How to Rope a McCoy
(Hell Yeah!)
myBook.to/ToRopeAMcCoy

You Are Always on My Mind
(Hell Yeah! Cajun Style)
myBook.to/AlwaysOnMyMind

If I Can Dream
(Hell Yeah!)
myBook.to/IfICanDream

Other Titles from Sable Hunter:

Be My Love Song
myBook.to/BeMyLoveSong

Su Rastro Caliente  (Hot On Her Trail)
Amazon US  http://amzn.to/1u2Dd3T

Posted by Liberty Ireland at 10:41 AM