Amazon (#FREE with #KindleUnlimited): http://amzn.to/2d0z8g7
Paperback: http://amzn.to/2ckSvOf
Synopsis: In present-day Scotland, not everyone is who they appear to be. Shifters have been hiding in plain sight for generations. It all starts with a single bear who falls for the most unlikely partner: a human. Bears and humans simply can’t pair up, or can they? Fall in love today with the Scottish Werebears and get the complete saga in one handy collection. Includes: An Unexpected Affair, A Dangerous Business, A Forbidden Love, A New Beginning, A Painful Dilemma and A Second Chance. FREE BONUS STORY: Sugar & Spice: A Scottish Werebear XmasScottish Werebears: An Unexpected Affair
When romance novelist, Clarice Adler, hides herself away in a secluded holiday cottage to finish a book, the last thing she needs is another relationship. Imagine her surprise when she falls head over heels for the man who runs the place. Derek McMillan knows Clarice is his mate, but he’s a bear shifter and she’s human and the two simply don’t mix. They are literally worlds apart; can they find a way to come together?
Scottish Werebears: A Dangerous Business
As part of the Alliance, bear shifter Aidan McMillan is hunting the Sons of Domnall, a secret society of humans sworn to destroy all shifters. Along comes Heidi Blackwood, his fated mate, and it suddenly becomes nearly impossible to focus on the job.


Scottish Werebears: A Forbidden Love
Alison Campbell has been told that shifters are evil and the world would be a better place without them. In her efforts to infiltrate the Alliance to gather intel for The Sons of Domnall, she comes across Jamie Abbott, bear shifter and Alliance leader, who doesn’t seem so bad at all. In fact, he seems to be all her heart desires and the feeling is mutual. Where will her loyalties lie when it becomes time to pick a side once and for all?


A New Beginning
Ever since developing delusions about turning into a bear at the most inopportune moments, Matt Argyle has been keeping to himself. When curvaceous beauty Leah Hudson moves in next door, suddenly his carefully orchestrated life becomes unsustainable. He feels compelled to get to know her, and in the process must learn some important truths about himself.


A Painful Dilemma
Henry Weston is a good man, and a good Alliance agent. But when he is ordered to spy on his own people, he knows he must rebel. He finds the perfect partner in Gail McPherson when they connect in a way only true mates can. There’s only one problem: Henry already has a mate whom he refuses to abandon.


A Second Chance
Journalist Charlie McAllister watches the New Alliance reveal itself on live TV and can’t believe her eyes; one of the shifters looks so familiar… Could that really be her friend James, whom she grew up next door to? The same James she had the biggest crush on, but who disappeared on her after they shared their first and only kiss? The void he left behind in her heart still aches, still she vows to track him down for an exclusive interview.


This boxset contains all six novellas in the steamy Scottish Werebears shifter romance series; each book features a different alpha bear and his fated mate and includes plenty of sizzling action, irresistible attraction and a happy ending for the couple, while the overarching plot of the series continues. Shifter fans love this series! One-click now to find out what all the fuss is about.

Lorelei Moone is an up-and-coming author of paranormal romance based in London. Her first book, Scottish Werebear: An Unexpected Affair has hit the virtual shelves on Amazon on 25 September 2015, and her second, Scottish Werebear: A Dangerous Business a month later on the 25th of October. A lover of all things sweet, and caffeinated, when she’s not writing about sexy bear shifters and their strong-willed curvaceous love interests, Lorelei can be found baking cookies or cakes for her family.
Website • Facebook • Twitter • Newsletter • Goodreads • Amazon Author Profile 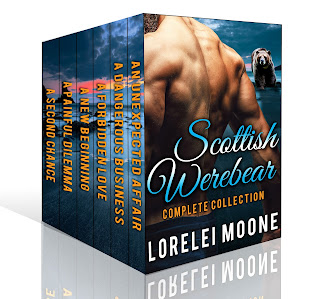 Posted by Liberty Ireland at 7:00 AM