It's a 5 Star Review for JAKE Destiny in Deadwood #1 by Cynthia Woolf! #Excerpt #HistoricalRomance #Review 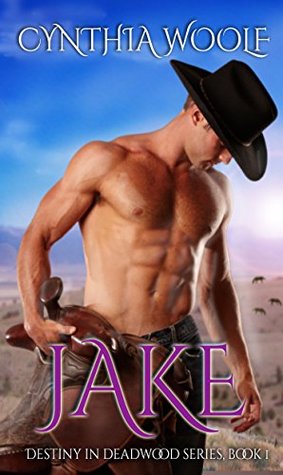 Jake Anderson killed a man defending his fiancée from a brutal attack, but lost her and his freedom in the process. Now he's on the run, tormented by the need for vengeance.

Becky Finnegan will do anything to escape her drunken father's fists, including slave away at their mine. Her only hope is to strike gold and make a new life for herself somewhere far, far away from Deadwood. But then Jake arrives and does the unthinkable...forces her to feel, to hope...and to love.

Jake would give his life to protect Becky, but all he can offer her is a broken heart, a criminal's life, and a past haunted by failure. How can he save her when he's already lost himself? Will he destroy everything, or can the beautiful rebel redeem Jake's lost soul?

A couple of years back, I acted as travel agent for my Mom, planning, organizing and preparing a trip for her and a friend to visit South Dakota.  They traveled all through southern South Dakota, taking in Mt. Rushmore, The Badlands, Sturgis and Deadwood.  Imagine my surprise and delight when I realized that JAKE is primarily located just outside of Deadwood, South Dakota, a place I feel I have taken a virtual tour of.  Combine that with my love of history and the old west in particular and I knew that I had found a book that for me, was a match made in Heaven!

Now if you are looking for a Louis L'Amour or Larry McMurty feel to your book, where there are days and days of painstaking (some would say excruciatingly s-l-o-w) detail of the area, time period and ambiance, you have the wrong book. Put Jake down and step away right now.  That's right.  There.  Now the rest of us that want a wonderful period romance with enough historical detail to keep you firmly rooted in the 1870's yet able to focus on the emotions and nuances of personal interactions, especially between a woman and a man, can stay right here and enjoy all that Ms. Cynthia has in store.

Between reading the blurb up above and the Prologue, you have the salient points of the plot.  Becky is a hardworking young woman who has had very little good or kind happen in her life. Billy is a piss poor excuse for a human, let alone Becky's father.  The Andersons are good men, all three of them  - Liam, Zach and Jake.  They take good care of Liam's two children, David and Hannah between them and they are the best thing to ever come into Becky's life, especially Jake.  At first I thought Becky was much younger than her 23 years but that was a good age, making her a woman ready to move on with her life.  I loved the way our author described the feelings that both Becky and Jake had when they first met and that they both felt that way.  So often it seems, especially in historical pieces that the woman has the feelings but not the man.  I also loved that they both had baggage and that Cynthia addressed it.  I know people didn't talk as openly back then as they do now about a lot of things but I have a feeling that a great many may have discussed things in private more than we know.  Either that or they would all have been CRAZY!

I loved that they had sex.  They had good sex.  They had a lot of good sex.  And she liked it!  All because he was thoughtful of her needs.  Some men today still don't get that.  I also loved how they (the Anderson's) and they (Becky and Jake) stuck together and worked together and stuck up for one another.  They had one another's backs and knew they could rely on one another and that means so much now.  I can only imagine how much that would have meant back then.  My final favorite thing was that things got tied up in the end and that's all I'm going to sy about that. *Cheshire Cat grin*

Though set in a lawless area, the violence is limited and though there are brothels a plenty in Deadwood proper, they have little to do with the story, leaving the sex limited to Jake and Becky.  I would say their sex is fairly descriptive and most certainly not for those under 18.  Jake is the first in a series of three:  Jake, Zack and you guessed it, Liam.  Personally I cannot wait to read them all.  Jake was an easy read - I completed it cover to cover in one evening.  This is the second of Cynthia's books I've read and I truly like her style.  I would not hesitate to recommend Jake to any Historical Romance lover.

I received this book from the author in exchange for an honest review.


Cynthia Woolf is the author of fifteen historical western romance books and one short story, and one novella with more books on the way.She was born in Denver, Colorado and raised in the mountains west of Golden. She spent her early years running wild around the mountain side with her friends.
Their closest neighbor was one quarter of a mile away, so her little brother was her playmate and her best friend. That fierce friendship lasted until his death in 2006.
Cynthia was and is an avid reader. Her mother was a librarian and brought new books home each week. This is where young Cynthia first got the storytelling bug. She wrote her first story at the age of ten. A romance about a little boy she liked at the time.
Cynthia loves writing and reading romance. Her first western romance Tame A Wild Heart, was inspired by the story her mother told her of meeting Cynthia’s father on a ranch in Creede, Colorado. Although Tame A Wild Heart takes place in Creede that is the only similarity between the stories. Her father was a cowboy not a bounty hunter and her mother was a nursemaid (called a nanny now) not the ranch owner.
Cynthia credits her wonderfully supportive husband Jim and the great friends she’s made at CRW for saving her sanity and allowing her to explore her creativity.

Posted by Liberty Ireland at 3:45 AM