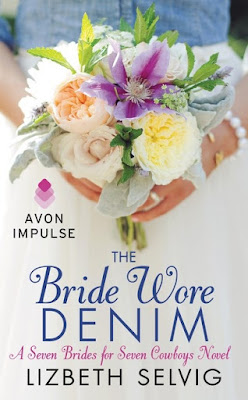 When Harper Lee Crockett returns home to Paradise Ranch, Wyoming, the last thing she expects is to fall head-over-heels in lust for Cole, childhood neighbor and her older sister’s long-time boyfriend. The spirited and artistic Crockett sister has finally learned to resist her craziest impulses, but this latest trip home and Cole’s rough-and-tough appeal might be too much for her fading self-control.

Cole Wainwright has long been fascinated by the sister who’s always stood out from the crowd. His relationship with Amelia, the eldest Crockett sister, isn’t as perfect as it seems, and with Harper back in town, he sees everything he’s been missing. Cole knows they have no future together—he’s tied to the land and she’s created a successful life in the big city—but neither of them can escape their growing attraction or inconvenient feelings.

As Harper struggles to come to grips with new family responsibilities and her forbidden feelings for Cole, she must decide whether to listen to her head or to give her heart what it wants.

Her first shivering instinct was to leap away, but his laughter held her in place—rumbly and comforting beneath her.
“Remember when we used to do shit like this all the time?” he asked.
“Again,” she firmed her voice so it didn’t match her wayward, quivering insides, “when we were ten.”
“It’s really good to see you, Harpo.”
“Yeah.” She closed her eyes while the rain splashed her face again, definitely feeling closer to ten than her sometimes ancient-seeming thirty.
They lay a moment longer letting their laughter ebb but then, with her heart pounding, Harper came to her senses and scrambled to her feet. It had to be the raw, see-saw emotions of the day causing this unwarranted reaction to him. Her friendship with Cole went back too far for her to allow some rogue attraction to take root. He and Amelia might be ex-lovers, but there was a code between sisters you just didn’t break.
She held out her hand this time, and he took it. Once he was standing she dropped the contact.
“I declare this a tie,” she said. “I propose we work together to get the chicken and neither of us has to eat lefse.”
“We call it a tie. I’ll help you catch the chicken. We both eat lefse,” he countered.
“Oh, fine.”
Once they weren’t sabotaging each other, they cornered Roxie and had her in custody within two minutes. Since Harper was the dirtiest—and she was extremely dirty—she carried the ticked-off chicken to the coop. Once she’d double-checked the gate she sagged against it, wet to the skin and slightly chilled from the breeze despite it being August.
“Thank you,” she said, as her adrenaline drained away and took her energy with it. “I’m sorry you got caught up in the rodeo.”
“Don’t be. The company inside was . . . frankly, not this much fun.”


You know me and how I love a good Cowboy Romance so I could hardly pass up a chance to read the first book in a new series ~ Seven Brides for Seven Cowboys.  I have not read Lizbeth's previous series, Rural Gentlemen but I understand it is excellent so yep, it's been added to my TBR pile! lol When I pick up The Bride Wore Denim to start reading it, I had no problem getting into it.  Even the funeral that kinda starts the story off was reminiscent of some experiences I have had and I was easily transported to right smack dab in the heart of Wyoming Ranch land.  Before I knew it, I was meeting the primary characters in the story.

The death in the story was that of the father of the family.  As these times often do, this brought all of the children home, even those who had not been there in some time.  All in all there were six daughters, one of whom was Harper, our heroine.  This is her love story, a possible chance at love with Cole, her secret childhood crush.  The big problem?  Not that he isn't interested, oh no.  It's that Mia, one of Harper's sisters and Cole have dated for years so talk about awkward!  Making things worse, Mia has some unresolved issues with Harper plus if there is one thing you don't do, it's break the Sister Code - It's Sisters over Misters after all!

So there are some serious family dynamics in play in this book and Lizbeth handled it all with great fineness.  Having grown up in a small family, I never dealt with a lot of issues like the ones seen here but my husband has shared tales from his childhood of being one of six kids.  Quite the adventure I think.  Cole played his role well.  He was not only Harper's love interest but he also shared his great love of ranching, of the land and the legacy his father lost.  It all gives Harper so much to chew on, to decide where her roots and her true self really lie - Chicago or here in Wyoming?  In the end all comes together as it should, and leaving plenty of room for more character growth in the upcoming books.

I truly enjoyed reading The Bride Wore Denim.  I love the land and ranching as though I were born to it so when I get to read wonderfully written book such as these, it feels like coming home.  I love the feeling Lizbeth puts in her books of seeing old friends and family and feeling welcome with room for one more at the table. 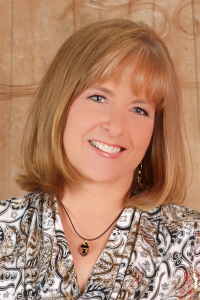 Lizbeth Selvig writes fun, heartwarming contemporary romantic fiction for Avon books. Her debut novel, The Rancher and the Rock Star, was released in 2012. Her second, Rescued By A Stranger is a 2014 RWA RITA® Award nominee. Liz lives in Minnesota with her best friend (aka her husband), a hyperactive border collie named Magic and a gray Arabian gelding named Jedi. After working as a newspaper journalist and magazine editor, and raising an equine veterinarian daughter and a talented musician son, Lizbeth entered Romance Writers of America’s Golden Heart® contest in 2010 with The Rancher and the Rock Star (then titled Songbird) and won the Single Title Contemporary category.
In her spare time, she loves being a brand new grandma to Evelyn Grace as well as to hike, quilt, read, horseback ride, and play with her four-legged grandchildren, of which there are nearly twenty, including a wallaby, an alpaca, a donkey, a pig, a sugar glider, and many dogs, cats and horses (pics of all appear on her website www.lizbethselvig.com). She loves connecting with readers—contact her any time!

10 (Ten) Digital Downloads of The Bride Wore Denim via Bluefire.

Posted by Liberty Ireland at 4:05 AM