After her best friend and her husband are killed in a private airplane crash, Keri finds some of her friend’s personal effects, one of which is a diary. When Keri reads it, she discovers her friend had been secretly in love with another man, a soldier. Keri knew nothing about the relationship, even though she and her friend were as close as sisters.

Determined to find the secret lover, Keri sets off on a journey and discovers the key to her destiny.

And Ryan. Who was he, and what had happened to him? Did he survive the last mission? Did he try to get in touch with Sophia after he returned to the United States? Her head dropped in despair as she realized again: she’d never known the real Sophia. Perhaps Ryan had. Perhaps Ryan had seen something tender beneath the bravura and the façade of self-confidence and control.

Keri reached down and splashed water on her forearms. Maybe her friends and family had been too close to Sophia to glimpse the nuanced, the vulnerable, the painful truth. Maybe Keri’s and Sophia’s friends had seen only a dazzling shadow of her, while Ryan had seen the true, enchanted image—the real Sophia.

Keri stared at a flock of seagulls gliding through the sunset sky. Sophia obviously had a talent for guarding and hiding her real self from the world. But if she’d been touched by love, maybe that love had opened her up to new vistas of feeling she’d never experienced before, vistas she hadn’t even known existed inside her. Real love can do that, can’t it? Keri had never personally experienced it, but she believed it could happen.

Keri stopped, hovering on the edge of an absurd thought. Should she try to find Ryan? The thought gave her a sudden electric thrill. She stared down into the sand, seeing the eroded ruins of an old sandcastle that had been punished by the hostile tide.

“Ryan,” she said aloud, the sound instantly swallowed up by the beat of waves striking the beach.

And how could she possibly ever locate Ryan without a last name? Sophia had never once mentioned it.

In an instant, Keri knew the decision had already been made: She had to find a way to track down and speak to this man. She whirled and marched back across the beach to where she’d left her chair and the diary. There had to be clues in the diary—had to be phrases that could help her find Ryan. At the very least, she could discover what had happened to him.

A half hour later, Keri slid behind the wheel of her blue Ford Focus and drove to the nearest Starbucks. She ordered a café latte and a scone and found a seat near the plate glass window that looked out onto Main Street. It was nearly 8:20 and, as daylight faded, the streetlight globes flickered on, spreading amber light onto the sidewalks. Keri opened her laptop, reached for her phone and called her friend Mitchell. He was smart. He’d know how to find Ryan. 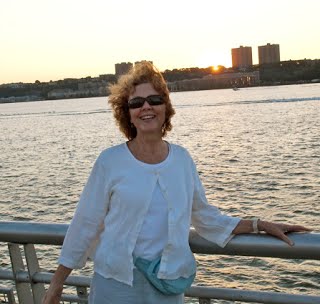 Elyse Douglas is the pen name for the married writing team Elyse Parmentier and Douglas Pennington. Elyse grew up near the sea, roaming the beaches, reading and writing stories and poetry, receiving a Degree in English Literature. She has enjoyed careers as an English teacher, an actress and a speech-language pathologist.

She and her husband, Douglas Pennington, have completed seven novels: The Other Side of Summer, Christmas for Juliet, Wanting Rita, Christmas Ever After, The Christmas Town, The Summer Diary and The Christmas Diary.

Posted by Liberty Ireland at 4:00 AM