Anyone of these hotties look familiar?
Right!
I posted about DEVON DRAKE Cornerback over
on CUDDLES PLEASE. not too long ago.
I LOVED that book as I mentioned a time or two
in my review and I imagine the book I have for you today is just as good.
Check it out! 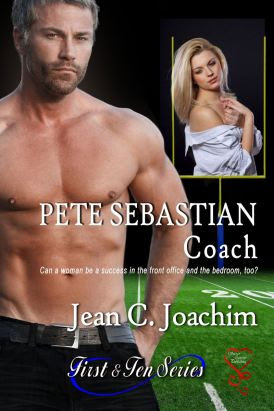 Pete Sebastian, Coach Bass to his team, thought he had his life under control until smart, alluring Jo Parker sashayed into a front office job with the Connecticut Kings. He locks horns with the beautiful female when she implements new ideas to clean­up the team’s rep. Was she there just to push him around or was she the one woman he’s been seeking?

Struggling toward success in the man’s ­world of the NFL, Jo Parker has relied on her brains and determination to get ahead. But her new job at the Kings has one hurdle she hadn’t counted on – a sexy coach standing in her way. How can she kept her mind on her job when all she wants is to get closer, much closer, to the coach?

Can Coach Bass handle a woman in the boardroom and bedroom? Can he keep his heart safe or will the revelation of a secret destroy his dreams, leaving him alone once more?

Pete stripped down to boxers and donned his running shorts. Not bothering with a shirt, he headed for the beach. There was no way he could get to sleep after his steamy encounter with Jo Parker. Running would clear his mind and calm his body.

He pulled an elastic with his house key on it over his wrist and left. As he walked down the path to the sand, he thought about Jo. Christ, I can’t stop thinking about her! Chilled by the night air, he started to run. He’d known she was sexy, but the way she had surrendered in his arms, well, surprised wasn’t the word. He never thought she’d fall without a major seduction. Flowers, candy, dinners out—now he could forget that. Next date would end in his bed.

Pete could hardly wait. Searching his memory, he couldn’t remember when he had been so turned on so quickly. She’d had him when she’d walked in wearing that sweater. Shit, I could barely keep my eyes or hands off her breasts. Lust had boiled up in his veins when she’d insisted on seeing his bedroom. Standing there with the sea on one side and alluring Jo Parker on the other, a foot from his bed, he could hardly control himself or ignore the protests from his dick.

PETE SEBASTIAN: ­ Winning the Super Bowl is just the beginning for Coach Bass, as his team calls him. He walks on water, until his world gets turned upside down by a feisty female. When the new V.P. of Publicity turns out to be a gorgeous blonde, Pete is stopped in his tracks.

Raising twin daughters alone after his wife took a powder, Pete has been too busy to be lonely. But now that his girls are off to college, loneliness has become his constant companion. Bed partners are easy to find, but the right woman, one who loves football almost as much as she loves him isn’t easy. So far, he has come up empty.

With a beautiful woman in the office next door, Pete can hardly concentrate on preparing for training camp. All he wants to do is kiss Jo Parker, but she’s tucked away behind a professional demeanor and not going to play his game.

Never one to throw in the towel, Pete has a strategy to win this woman who keeps one step ahead of him. Can the charming, sexy coach win the affections of the elusive Ms. Parker? Or his he destined to continue on playing a solo game?

JO PARKER: ­ Jo Parker is a woman who knows what she wants, right? She thinks she does. A successful woman in the man’s world of NFL front office, Jo has worked hard and taken lots of guff to rise to the level of vice president of publicity.

Her new job at The Connecticut Kings presents a challenge. Not only does she have to clean up the reputation of a team that fired two players for domestic violence, but she has to resist the practically irresistible charms of the coach, Pete Sebastian.

With her pug, Daisy, tucked under her arm, Jo takes Monroe and the Kings by storm. She rolls in, determined to send the players to anger management, to avoid further bad behavior. But they roadblock her at every step. And leading the resistance is the devastatingly handsome, Coach Bass.
Chemistry and mutual attraction short­circuit Ms. Parker’s plans. She finds herself in unfamiliar waters, falling in love. But love is not in her plans. She doesn’t believe in Prince Charming and she’s not about to give up her independence for a roll in the hay.

But loneliness and a hunger for love, born from a sterile childhood, draw her to the warmth and charm of Pete Sebastian. Will she be able to control her emotions, fight through their mutual attraction to focus on the job and only the job? 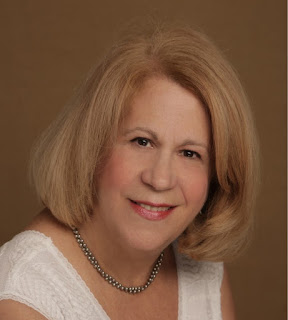 Jean Joachim is a best­selling romance fiction author, with books hitting the Amazon Top 100 list since 2012. The Renovated Heart won Best Novel of the Year from Love Romances Café. Lovers & Liars was a RomCon finalist in 2013. And The Marriage List tied for third place as Best Contemporary Romance from the Gulf Coast RWA. She was chosen Author of the Year in 2012 by the New York City chapter of Romance Writers of America.

Married and the mother of two sons, Jean lives in New York City. Early in the morning, you’ll find her at her computer, writing, with a cup of tea, her rescued put, Homer, by her side and a secret stash of black licorice.

This event has been hosted & organized by

Posted by Liberty Ireland at 8:00 AM