How to Fall in Love: Vikings or Cowboys by Gina Conkle, Author of TO FIND A VIKING TREASURE #Giveaway #GuestPost #Vikings #Cowboys #Love 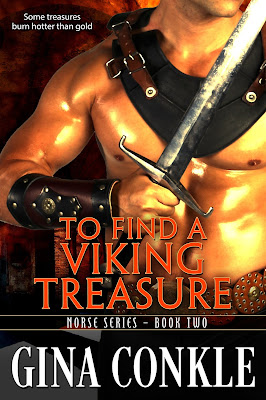 How to Fall in Love: Vikings or Cowboys
by Gina Conkle

There’s nothing like a long-legged, male swaggering across the page to make your heart swoon. They can be the strong silent type or the leader of the pack. Bold, brash, and wearing boots, we love our alpha heroes.

But comparing Vikings to cowboys? That’s apples and oranges, isn’t it?

Both Wore Boots
Who doesn’t love a man in boots? Cowboys wore the leather variety. Vikings wore leather, or fur boots cross-gartered to hold them up.

Cowboys had their six-shooters and rifles. Vikings were walking arsenals: swords for wealthier warriors, axes and hammers for the common man

The horse was the main transportation for cowboys. They also rode in wagon trains. Vikings liked war horses and sleek, keeled ships (not a lot of wheeled carts/wagon transports for Vikings and those wagons that have been unearthed had clunky solid wooden wheels).

Cowboys road in quietly (or announced their arrival with a bugle if they rode in the cavalry). By contrast, Vikings packs put large iron ring chains across their horses’ chests to scare the living daylights out of their opponents.

Here’s where Vikings and Cowboys go their separate ways on this list.

The Loner and the Wolf Pack

By old west lore, cowboy romances usually start out with a loner. Oh, I know there were banditos and rustlers who traveled in groups. But, by and large, if someone asks “List Cowboy Traits” loner would make the list. Ranches were spread out, lending to isolated living.

Vikings raided in wolf packs. Many lived communally in longhouses and ringed forts. There were loners, but to survive the icy northlands, Vikings needed to work in groups more than independently.

Who Wore the Pants?

Historical cowboys “wore the pants” on the range or the ranch. Sure, women had to be strong and independent in the old west, but cowboys and Vikings hit a big fork in the road here.

Viking women stood toe to toe with their men. They could be shield maidens and fight if they choose. They easily inherited land and wealth in the Dark Ages. Some rose to power as governmental leaders as far back as AD 876. They could even divorce if they choose (by gathering witnesses and announcing their divorce at their longhouse lintel and again by their bed).

A woman needed a lawyer and a lot of money to divorce in the old west. It didn’t happen very often.

And we love those bad boys with a heart of gold!

Home on the Range or Roam the Range
Cowboys roamed wide open country. Most stayed here in the USA (with some going to South America). Vikings by contrast traveled far and wide. Archaeologists are still discovering more far flung places Vikings visited. When it comes to the adventurous spirit, Vikings were the boldest and brashest at exploring the four corners of the earth.

Tall Tales
Cowboys have campfire stories, but Vikings made the annals of literary history. They have their own set of literature – the Sagas. In today’s mass market literature, there’s a lot more cowboy romances out there than Viking romances. Don’t you think we need more hot heroes from the north?
I hope you’ll tilt the scales in favor of Vikings and read my book, To Find a Viking Treasure.

They Save the Day
No matter if your hero rides in from a dusty western trail or races ashore on a fast ship, cowboys and Vikings make fine book boyfriends.

Now you tell me, what surprised you from the list above?


What a great guest from Gina Conkle.  I am a HUGE Cowboy fan as you know but Vikings hold a certain allure too.  Thanks to Gina, we all have a good grip on how they are the same and yet different. 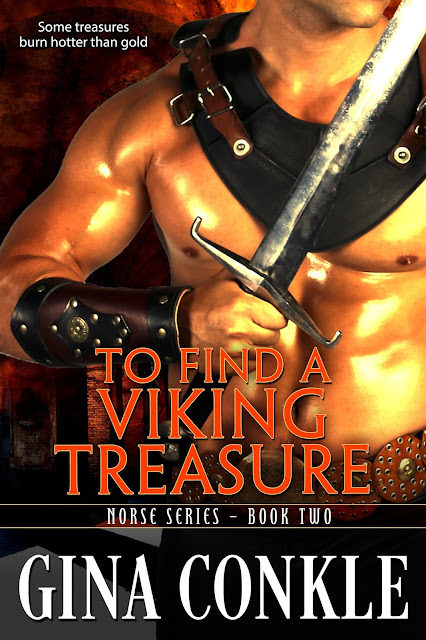 Survival’s in his blood Rough-souled Brandr’s ready for a new life far from Uppsala, but he can’t stop thinking of a certain flame-haired thrall named Sestra who gets under his skin. Before he leaves for good, the Viking has one final task —Protect her at all costs. Saving others is her purpose A slave since birth, Sestra’s life has been filled with hardship…until she learns of a treasure hoard. With war coming, claiming the riches will save lives, but only one Viking can help her on this journey —Brandr, the fierce silver-eyed scout. Chasing more than silver and gold Brandr and Sestra have shared taunts and barbs. Now they must share trust in what becomes a desperate bid to survive. Passions flare as secrets unfold, leading one to make a daring sacrifice that changes everything on their quest To Find a Viking Treasure…

“Maybe I get you.” Brandr sliced the oars through water…back and forth, his body’s motion hypnotic and smooth. “Go ahead. Talk to me.”
The Viking could be a mystical warrior dressed in black against waning fog, his graveled voice working a kind of silken magic. Sun shined through clouds, the pearled orb anointing his head. Perhaps Odin did send Brandr to save the day. Wraiths rose up from the channel as if to push them along. Did the Norse gods want them to succeed? She didn’t believe in Odin and his Valkyries, but the stories Vikings spun at night entranced her.
“You could tell me what you’ll do with your reward,” she said.
He snorted. “I said you could talk to me. Not the other way around.”
“That’s not how it works. People take turns talking and listening to each other. It’s called conversation.” She angled her head coyly. “Vikings can do it. I’ve seen it happen.” Brandr squinted at tree tops rising above the mist.
“Never been much for talk.”
“Your mouth never stops when trading jibes with me.” His chuckle was raspy and low.
“You have a way of loosening my tongue.” To her shame, his laugh cut a scorching path through her body and her legs fell open under her skirts. Her knees were heavy, and she left them open.
“You’re a warrior long in service to Lord Hakan. Surely you’ll get a bigger reward than a handful of coins?” His tarnished silver eyes pinned her.
“Maybe I get you.”


Years ago I eloped at midnight after my favorite alpha male (Brian) won a game of pool. We got married the next morning in Vegas and life’s been an adventure ever since! We have two teenage boys who keep us hopping. Family vacations often take us to museums, castles, and forts, which my sons like better than roller coasters. Viking and Georgian romance is my happy place to read and write. My other happy places are times with friends, cooking, a little gardening, and a long ago love for exercise that I keep trying to revive.

Posted by Liberty Ireland at 12:58 PM