Folks in town call him a monster—say he’s dangerous. But I know him simply as Elijah Hays, the quiet, gentle giant who works with the horses on my ranch. I can feel him watching me, that steady intense gaze making me crave things I don’t quite understand, burn in a way that frightens me. He’s always kept his distance…until that night.

I remember him coming to my rescue, me following him into the barn, giving him his first taste of a woman, and his inexperienced yet barely reined touch turning me to ash.

Now all I can think about is exposing the dark desire I see deep inside him—having him turn those dark desires on me. That low, gritty voice rasping orders in my ear. Those huge, rough hands holding me down when a storm blows in.

I want his surrender. His control. I want to break him…and have him break me…

He’d obviously tugged off his shirt when he’d walked in, because now his chest was bare and glistened with sweat. He was breathing heavily, fists still clenched tightly.
“Miss Abigail?” he said through panted breaths. Despite that wild stare and the way his body throbbed with aggression, when he spoke, none of it came through. His cheeks were dark from exertion, mouth slightly parted as each heavy breath pumped from his lungs, struggling to maintain control, but still he hadn’t directed any of that anger at me.
I managed to unglue my feet and started toward him. He seemed to brace himself as I moved closer, hands on hips, back and shoulders stiff. When I stopped in front of him, instead of his direct stare, he aimed his eyes at the ground. “Eli?”
He didn’t move, didn’t speak. Reaching out, I touched  his arm. “Elijah?”
He jolted, muscles tightening under my fingers. God, I felt tiny standing this close to him.
He finally answered, voice low, “Ma’am.” My nipples tightened painfully. He didn’t pull away.
“I just…I wanted to thank you for what you did back there.” His head was still down, not allowing me to see those dark eyes. Without thought, I reached up, threading my fingers in this hair, and tipped his head back. My only thought had been to get those eyes on me again. I needed them on me.
My belly dipped and swirled at the rough sound that tore from his throat. I was about to pull away, to apologize, but he tilted his head, pressing more firmly against my palm, moving the tiniest bit closer. Finally, he raised his chin, thick lashes lifting, and I had them. My body zapped, sparked, breath escaping in a rush, heat curling and growing like a wildfire was spreading over my skin.
“You like my hands on you?” I whispered before I could think better of it.
His breathing had grown ragged, a softness, a vulnerability in his eyes that made me want to give him everything I didn’t think he’d allow himself to ask for. His gaze darted to my bare shoulder, where Kyle had yanked my shirt down, and his wide chest expanded with his sharp inhalation. He didn’t like the reminder of what happened, of Kyle touching me that way. “Do you want to touch me, Eli?”
I could barely believe the words that just came out of my mouth, but I didn’t want to take them back, I wanted those massive hands on me, had wanted them on me for the longest time.
The tip of his tongue darted out, sliding across his bottom lip, then his head dipped, just a fraction.
“You do, don’t you?”
He stared down at me, his large frame, thick with muscle, towering over me, looking like he could pick up that tractor beside us and fling it halfway across the field, which made the almost innocent curiosity, the restrained excitement he was currently aiming my way all the more surprising.
“Yes,” he rasped, cheeks darkening further. 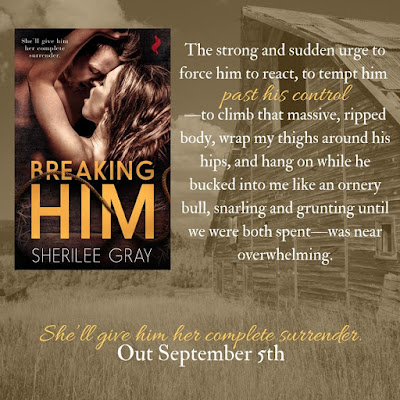 Sherilee Gray, you have been promoted to the top of my list for well-written erotic heat that fairly sizzles off the page while the emotions weave their magic spell on the three of us: The couple in the story, Abigail and Eli, and me, the reader.  Girl, you so totally rock!
This is a page turner and a page burner!  If you are looking for a good (and hot), well written (and hot) erotic and hot story with an actual plot and storyline beyond the (hot) sex, then Breaking Him is the book for you!  Did I mention that it is HOT?
When a woman is confident in herself, isn’t afraid of her sexual side and, like Tim McGraw says, “Always be humble and kind”, well, that’s the kind of woman I want to read about.  She’s the kind I would like to be and have as a friend and Abigail had this in spades.
Now, I have a serious thing for cowboys. I always have.  I’m talking about the real deal, the rise-at-dawn, hardworking, often-not-a-big-talker-but-when-he-does, his-words-really-count, good-with-animals,-small-children-and-the-elderly, most-comfortable-in-jeans-and-boots often-says-ma’am kind of guy.  They may or may not actually come with a pickup truck and a ranch. *grin* They are also good to the bone.  That’s not to say they don’t make mistakes -they’re human after all- but they have goodness in their marrow, even if it’s not evident to the World at large.  Such was the case with Eli.  People that didn’t know him, didn’t understand him, well, they were unkind.  But not Abigail.  She knew the real deal when she saw it.  She said, “His size, his quiet nature, his past and fears, none of that could hide his beautiful soul.  He’d never hurt me.  Ever.”
Okay so Sherilee Gray provided us with these two likeable characters.  Now what?  Well buckle in baby because it’s gonna be a wild ride!

The tension. The Heat. The SEX! I mean scorching white hot sex! And with the emotions that filled the characters, well, I started to say that you would have to be a Monk but let’s replace that with dead…You would have to be DEAD to be unaffected.  Whoo. I need a fan.  And a fan boy.  To top it all off, Ms. Gray managed to keep the skin-to-skin time from drizzling down into smut. That’s quite an accomplishment in my book.

Talk about Calgon take me away!  I enjoyed the hell out of this book.  The scenes progressed in emotion as well as intensity, bringing me quite willingly along with them.  This is a delicious piece of … No, dirty little mind! lol  I was going to say work.;)  Breaking Him is well paced and sadly, those 142 pages fly by and before you realize it, you have reached the end of the story.  But, in case you missed anything, you might want to do what I did and read it one more time just to be sure. *grin*

Sherilee Gray writes sexy, edgy contemporary and paranormal romance. Stories full of heat and high emotion, following stubborn characters as they fight against the odds… and their happily ever after. She’s a kiwi girl and lives in beautiful NZ with her husband and their two children. When not writing or fueling her voracious book addiction, she can be found dreaming of far off places with a mug of tea in one hand and a bar of Cadburys Rocky Road chocolate in the other.

Thanks for coming by and checking out my review of BREAKING HIM by Sherilee Gray! 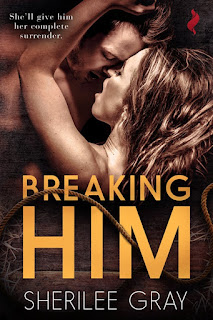 Posted by Liberty Ireland at 5:41 AM