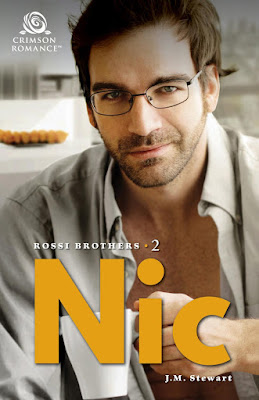 Single father Nic Rossi’s only desire is to raise his little girl with the same love and security his grandparents gave him and his siblings. That is, until Anna Thompson and her frightened daughter walk into his family restaurant, looking for employment, and turn his carefully ordered world upside down.

On the run from her abusive ex, Anna wants one thing: a quiet place like Angel Bay to raise her daughter. But she needs a job to pay for that dream, even if her new boss is a man whose sheer size makes her tremble. Yet Nic’s capacity for kindness leaves her feeling safe for the first time in years, and the gentle giant slowly awakens her long-dormant passion.

Then her ex-husband turns up like a bad penny, threatening not only Anna’s safe haven but Nic’s daughter in the bargain, forcing them to choose between love and family.

She blew out her held breath, pushed her plate away, and offered him a smile. “Thanks for the meal. I will repay you. I need to get her to bed. What time would you like me to be here tomorrow?”

She scooted out of the booth, but his hand caught her arm before she could turn to pick up Lacey. Blood whooshed in her ears, and breathing became impossible as panic clawed its way through her chest. Tony’s face lodged itself in her mind. Eyes narrowed and staring her down.  The way he looked right before his fist came down on her …

He’s not Tony. He’s not Tony. She repeated the long-held mantra over and over and drew slow, deep breaths in an effort to put a lid back on the panic. Still the room around her spun as the past closed in on her.

“The meal’s on me, remember? You can pay me back by letting me help you.”

Nic’s voice jerked her back to the present. She lifted her head to find him watching her, gentle concern in his searching eyes. Was he really this nice? Or was this just a ruse, the way it had been for Tony? She didn’t know, but she had no desire to find out. She didn’t need his help. She just needed a job.

She glared at Nic. “What is it with you? Do you have a thing for taking in strays or something, Mr. Rossi?”

“My name is Nic, and yes, actually I do. My nonna used to roll her eyes every time I brought home a stray cat or dog.” Amusement laced his tone, his eyes crinkling at the corners.

God, did nothing faze the man?

His expression sobered. “Let me help. Because I can.”

She blew out a defeated breath. “Why do you even care?”

“Why do I scare you so much?”
Touché.

Nic released her arm and folded his hands on the table instead. “You want the God’s honest truth? That’s why I give a damn. Because I terrify the both of you, and I hate it. Every time I look at your daughter, I see my own.”

She wrapped her arms around herself. The man left her feeling open and exposed. He offered her something she didn’t know if she could ever repay: human decency. “I can’t ask you to do that for me.”

“Then do it for her.” He nodded in Lacey’s direction. 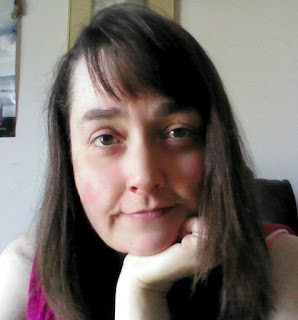 J.M. Stewart is a coffee and chocolate addict who lives in the Pacific Northwest with her husband, two sons and two very spoiled dogs. She’s a hopeless romantic who believes everybody should have their happily ever after and has been devouring romance novels for as long as she can remember. Writing them has become her obsession.

Win a $25.00 Amazon or B&N eGift Card
a Rafflecopter giveaway

Posted by Liberty Ireland at 7:47 PM