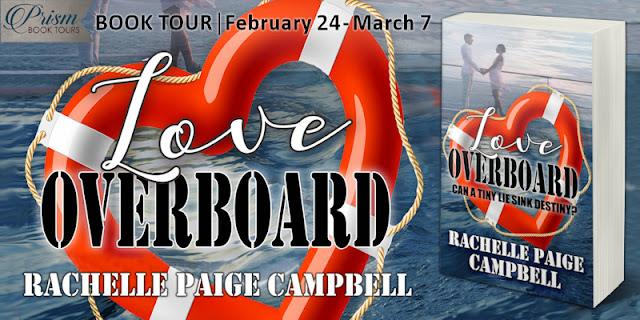 On Tour with Prism Book Tours

We hope you enjoyed the tour! If you missed any of the stops
you'll find snippets, as well as the link to each full post, below:

What was your motivation behind writing LOVE OVERBOARD?

I was watching one of my favorite movies, While You Were Sleeping, and I was struck by how one simple lie ended up so complicated. Even with the best of intentions, telling a lie or withholding the truth can really convolute an otherwise straight forward situation. The idea for my heroine, Caitlyn Moore, faking amnesia started as a “what if” scenario. She is well and truly over her ex, but he appears on her dream vacation—the first big goal she’s achieved—and throws her for a loop.

. . . If she wanted peace in their roommate situation, she resolved to bear his annoyance. The least she could do was appeal to the kind man she knew and strike up a civil conversation. “Did you say you were married?”

He choked on a gulp of water. Pressing a fist to his mouth, he coughed twice, took another sip, and nodded. “Yes, I’m married.”

“You said we broke up recently?” She rested her chin in a palm and cocked her head to the side. If he learned the truth, her questions wouldn’t earn her any reprieve. Her curiosity was too piqued, however, to resist.

A jazzy melody snaked from the secluded room to the hallway.

He paused with a hand on the doorknob. While the room wasn’t marked off-limits with any sort of signage, he had never encountered another crewmember or guest here without specific arrangements. He hadn’t bothered to lock the doors. Had someone come to find him? Every performer on deck demurred against the showcase role in the piano bar. Someone downplayed his or her skill. He stretched his neck from one shoulder to the other and eased the knot of tension.

Entering the room, he shut the door as silently as possible. From his position, he couldn’t spot the player hidden behind the baby grand piano. Whoever discovered the room had come across a beautiful instrument not meant for amateurs. The mystery pianist was the solution. He couldn’t afford to spook the person.

"It is a sweet, clean romance in which love and lust are subtly discovered, combined and served in perfect doses making me really enjoy the company of the characters. . . . Mrs. Campbell's Alaskan cruise is a great choice despite or because of the threats of the icebergs of the sea or our souls. Enjoy!"

"What a wonderful romance! The story gives us hope with the many situations we encounter in life. Overcoming obstacles and coming out a better person in the end is a fun journey to follow. . . . I highly recommend this uplifting romance story to everyone."

What did she think? Caitlyn held her breath. Every nerve ending in her body readied for command of either fight or flight. She inhaled through her nose and caught a whiff of recently cleaned carpet and woodsy cologne. From her peripheral vision, she surveyed the gleaming baby grand piano.

After discovering the elevator in the faux smokestack on the top deck, she boarded and rode up one floor. The elevator opened to another elegantly appointed Art Deco vestibule and an open doorway. Not spotting any off-limits signs, she entered the room and spotted the piano. Resistance to the beautiful instrument was futile. At her sides, she twitched her fingers against her thighs, remembering the delicate touch of the keys and the momentary balm for her nerves. His invitation was her nightmare.

"I enjoyed reading Love Overboard. . . . Seeing Alaska is something I always wanted to do, so reading about it is very enjoyable. Caitlyn never imagined she might fall in love on the cruise. . . . The book was fun to read."

She nodded but her chest tightened. If her most remarked-upon personality trait was her inability to take a relatively minor risk, what did the quirk say about her character? She considered her caution a positive indication of her steadfastness, but perhaps no one else agreed. Maybe, instead, others viewed her as a woman incapable of change. She wanted to be capable of rising to a challenge and supporting her friends. How many friends did she have left? She hadn’t socialized with her colleagues in years and only met up with Steph. In an effort to minimize risk, she stopped seeking new people. Greg bumped into her. Their accidental circumstance forced an introduction. When she got home, she vowed to broaden her world.

"Love Overboard is a really nice short and sweet romance read. Caitlyn found herself in a shockingly embarrassing Alaskan cruise, one that was suppose to be with her sister, but turned out very differently. In the beginning, I grew to like these characters, and the plot kept me wanting to keep reading to know the ending."

"This is a wonderful escape book to read. I loved "going" on an Alaskan Cruise with them. I hope to be able to see some of the places described in the book. I could picture them in my mind. I love it when a book helps me envision the characters and setting."

"Rachelle Paige Campbell gives readers a peek into cruise life as well as a handful of the wonders of Alaska. Love Overboard is also a story of stepping out of your comfort zone and realizing that some risks are worth taking. . . . it was a fast read. It was definitely a different kind of plot than I've seen in a while, which I appreciated!"

. . . The helicopter flew over a section of the glacier with deep rivulets cracking the surface. Craggy blue ice appeared like a rare gem, the breadth of the expanse and depth of color almost unimaginable. Missing the scene of majesty before her would have been a lifelong regret. What would have happened if her family had taken the trip together?

If Dad was here, I wouldn’t have boarded the helicopter.

She dropped her shoulders. No one expected her as the shy unassuming daughter to escape her comfort zone. Greg didn’t know her well enough to trap her in the same circumstance. She discovered a new opportunity from his encouragement and didn’t want to slink back to her old ways. Would she—alone—find the same courage at home?”

"This book was an absolute delight to read! I savored the story in its entirety, and I was thoroughly charmed and entertained by both main characters. The author told a simple but relatable story. . . . I felt just like I do when I watch a good Hallmark movie. Warm, fuzzy, and filled with hope for the days ahead. Thank you to this author who took the time to tell a story full of love, hope, and joy!"


Beauty in the Binding - Excerpt

Several times over the next four hours, Greg held his breath. As a man who prided himself on his quick turn of phrase, he’d been struck speechless. What compliment could he offer to compete with the wonder of their adventure?

They boarded the helicopter, donned headsets, and were airborne. The chopper soared over the glacier. Greg tilted his chin and peered out the window at the crevasses and streams rippled the surface like the bottom of the ocean from pounding tides.

Over the headsets, a guide directed them to view the nearby wildlife. He explained the unique blue coloring resulted from wavelengths of light being scattered and the hue saturating the farther it traveled.

"I really enjoyed this short and sweet cruise ship romance. The characters were so relatable, especially Caitlyn. . . . it was one giant ocean-going adventure after the other making it a fun read. I loved the chemistry between the main characters and before long, I was cheering for love to prevail. I think you will too as you escape into this terrific heartwarming book."


Edits and Reviews by Leslie - Excerpt

Greg poured a mug of coffee and extended the cup in offering.

He frowned. “You’re not waiting for coffee? You just like to stand in lines?” The corners of his mouth lifted.

“No.” She caught her bottom lip with her teeth. His near-smile was contagious. She enjoyed their conversations and teasing repartee. She’d never before engaged in playful banter with a man. If she was smart, she wouldn’t start now. “I adore coffee. But…” She dragged the word for emphasis. “I don’t drink black and that mug”—she pointed toward the filled-to-the-brim ceramic in his hands—“has no room for my mix-ins.”

"Rachelle Paige Campbell gives readers a peek into cruise life as well as a handful of the wonders of Alaska. Love Overboard is also a story of stepping out of your comfort zone and realizing that some risks are worth taking."

She lowered her gaze from his incredulous eyebrows to the empty mug she cradled. Only a drop of coffee remained, she needed more liquid fortification. Yes, she would relinquish an adventure as a solo traveler. Growing up after tragedy, she operated on constant high alert against any conversation veering toward emotions she’d rather not endure, like pity. With Greg, she couldn’t avoid tough talk. Strangely enough, she didn’t mind as much as usual. “I paid for two spots. I’m not as comfortable being on my own as you might think given my current circumstance.”

"I was cringing, laughing, and deeply sympathizing with this poor girl, as she awkwardly stumbled her way through a ton of personal growth, while trying to make the best of her life-long dream of seeing Alaska. . . . All in all, this was a fun, easy read that entertained. Campbell does a good job of portraying accurate feelings and character development that played on my emotions and allowed me a contented escape."


underneath the covers - Excerpt

She caught his gaze and tucked a strand of hair behind her ear.

He flashed a thumbs-up and grinned.

Smiling, she looked away and started the next tune.

Without her, he would have floundered on his last itinerary. She faced her fears and saved his reputation on the cruise. Seated at the piano, she played like a natural performer, leaving no hint to her underlying nerves. Unless she disclosed her anxiety, he—and the audience—had no clue about her stage fright. If she could challenge herself, then he should too. He swallowed hard. Fighting against familial expectations was easier said than done.

"It was fun to feel like I was on a cruise while reading. . . . Love Overboard is such a cute romance. If you love oceans, traveling, and Clean Contemporary Romance then this book is for you!"

Don't forget to enter the giveaway at the end of this post... 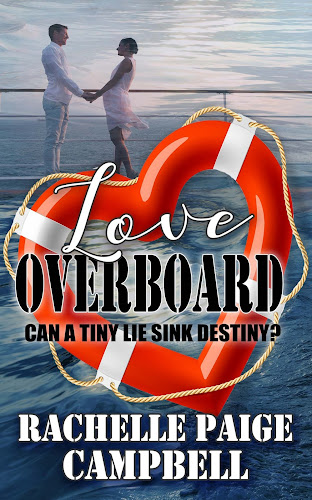 Forced to share a stateroom with her ex-fiancé, Caitlyn fakes amnesia to stay on board her dream Alaskan cruise. Torn over deciding his future, Cruise Director Gregory tumbles into helping her. As they grow closer, unspoken secrets threaten to rip them apart, for good. 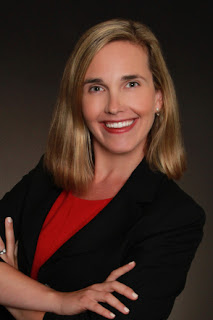 I write contemporary romance novels filled with heart and hope. I believe love and laughter can change lives and every story needs a happily ever after.

Check out my blog for updates on my current projects. My published stories are listed by series name on the menu at the top. 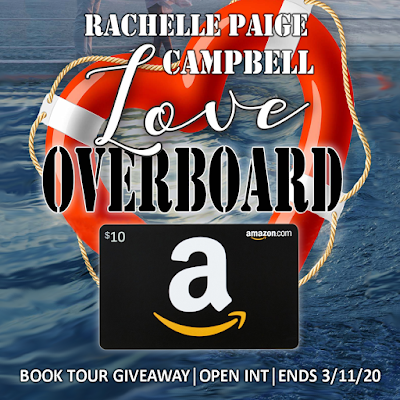 Posted by Liberty Ireland at 4:00 AM